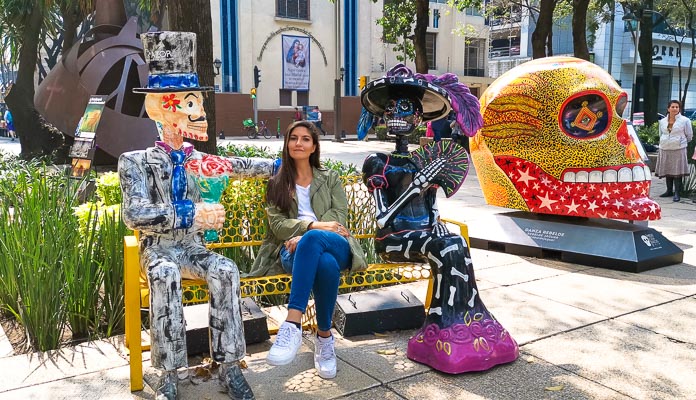 It is time for a trip that I have planned for almost 4 months to come. We are going on a 25-day tour. Our first stop is Mexico City, our second stop is Oaxaca for the Day of the Dead, our third stop is the Yucatan Peninsula and finally Cuba. You can reach my detailed travel articles about all stops from my blog. I also share my instant stories To my Instagram profile I bolted. So you can get more details from there.

We went with Turkish Airlines, which made a direct flight from Mexico City to Mexico City, and returned to Istanbul directly from Havana. Since Air France tickets, which are the most suitable alternative for this journey, are not cheaper than the tickets we bought, we have never had the chance to find a different alternative to an alternative aircraft. I tried to explain our detailed adventure region by region. But first, some things that interest me in Mexico City.

Some Mexican Facts That Surprise Me

Where Did We Go In Mexico City?

Plenty during our stay for transportation metro We use. Although it remained the same as it was done in 1969, we had problems with ventilation and crowd, but we preferred human traffic over never-ending vehicle traffic.

Taxi use is quite common and not very expensive. If you say be more reliable uber but there is a cheaper option than that CabifyIt was almost half cheaper at the times we looked. It’s best to install and follow both.

As we are going to drive a car, we recommend everyone tellcell We received a contoured package from. We used this 26-day package comfortably throughout the entire trip.

The most iconic name of Mexico is definitely Frida Kahlo. The house he lives in has been turned into a museum and opened to visitors. We waited 2 hours at the door to enter the museum, which we queued spontaneously half an hour before its opening.

You have to buy tickets online and go, because it is highly unlikely that the queue will come to you. Entrance to the museum is 230 MXN per person (Mexican Peso), you also need to pay an extra 30 MXN to take photos inside 🙂

Anyway it is absolutely worth it for this house full of gorgeous garden and Frida’s belongings and works. There is also a cafe where you can spend time in the garden. When we left, another area had been added to showcase their clothes, but it could be temporary. Since there are no more than a certain number of people at the same time, you are not struggling with too much crowd inside, but this may affect your waiting time at the door.

Aztec city, which you can reach with a journey that takes about 1 hour from Mexico City. It is famous for its two huge pyramids. Moon Pyramid and Solar Pyramid It is open to visitors so that you can climb if you wish. I suggest you do your research before you go because the explanations in the ancient city are very poor. In addition, since there is no woodland and greenery, it is compulsory to visit with a hat and water.

The entrance fee is only 75 MXN and it is open from 08:00 in the morning. You should spend at least half a day here. It is useful to snack in the bag. We went from the city by public transport and the trip was very enjoyable. If you wish, you can reach here with daily tours. For those who want to go, the transportation is as follows:

This is a delightful Mexican market where you can find both souvenirs and food. Prices are fine but bargaining is possible. We bought many of our souvenirs from here and realized that we made a good choice as we continued to travel in Mexico. We found the daily menu and the English-speaking waiter in the middle of the restaurant 🙂

Frida Kahlo’s house is located in the Coyoacan neighborhood. Thus, when you leave the museum, you have a chance to visit this region. Be sure to spend time here, because it should definitely be seen with Coyoacan architecture. You can spend a day here with its coffee shops, market places and pleasant places.

This was the least favorite market place in Mexico. It was like the Mexican version of the evening dresses in İzmir Kemeraltı. Outside the market where traditional clothes are sold for boys and girls, it is full of textile products that you won’t want to buy. Of course, it can be tried for a different experience.

Another pleasant market place in Coyoacan. One of the stops where you can find souvenirs unique to Mexico.

When you go from the right side of Zocalo, you can see the ruins of Templo Mayor. Instead of going inside, we chose to go to the cafe opposite and watch the coffee while drinking.

All of the historical squares in Mexico are called Zocalo. Mexico City’s huge-sized historic square Secretaría del Medio Ambiente, Palacio Nacional, Sagrario Metropolitano, Catedral Metropolitana de la Ciudad de México surrounded by. Especially famous mural artist in Palacio Nacional Diego RiveraThe works of are visible but when we went we could not see it because it was closed due to Day of the Dead 🙁

In the streets that emerge, well preserved streets full of history are waiting for you. Do not forget to spend time for a trip in this area.

When the entrance to the museums was free on Sunday, I immediately plunged into the Palace of Fine Arts. In the museum, where classical and modern works of art can be seen together, there is a wide selection such as painting, sculpture, and photography. It takes your hours to visit in detail, but definitely stop by, it’s a very nice museum.

The only work worth seeing in the museum, which I am very happy to see on a free day, is a 15-meter mural work by the artist in 1947. Sueño de una tarde dominical en la Alameda Central (Dream of a Sunday Afternoon in the Alameda Central)

A huge park in the middle of Mexico City. It has everything from the lake to the buffets. It is a beautiful area but its only problem is that it has too many benches. We couldn’t understand much from the vendors’ buffets and noises. My favorite area was Auditorium. In the forest, classical music plays in a closed area with rocks and trees. You can spend time comfortably on the benches or borrow books from the table. The only rule is to be silent. Stop by for 15 minutes to relax.

The Roma quarter is one of the younger parts of Mexico City. We said to come to this region on a rainy evening and spend time in Mercado Roma in the Food Market concept. Although it looks like a small version of Time Out Market in Lisbon, unfortunately it did not please us as an experience. The hamburger we ate was very ordinary, even the worst things we ate in Mexico. Although the environment is not bad, it will not please you if you have seen much better. Of course there are restaurants, bars, ice cream shops.

Take half a day to the huge museum that separates all civilizations living in Mexico from time to time. In the museum I like very much, you can see the traces of many civilizations from the Aztecs to the Mayans and see how much more civilization is hosting Mexico.

Well known in the museum Aztec Sun You will have the privilege to see the stone closely. The entrance to this magnificent museum is only 75 MXN, or 3.5 dollars.

While walking towards Chapultepec Angel of IndependenceWe wanted to see, but we haven’t seen much since it is under renovation. But we came across the wonderful open air exhibition on this boulevard. Due to the Day of the Dead Day, different artists throughout the boulevard La Catrina so they had skull designs. After navigating through huge adaptations, we found ourselves among the creatures.

Again for the Day of the Dead alebrijes The contest was organized and hundreds of different adaptations were exhibited on the streets. It is also a paper Mache art made of paper.

Alebrijes is the name given to the brightly colored Mexican folk art sculptures of fantastic creatures. Pedro LinaresThis art, which started by seeing and drawing hallucinations about a forest full of brightly colored animals during a febrile illness, has become one of the traditional arts of Mexico. You can find your gifts everywhere.

Places we would like to go again in Mexico City

We couldn’t have had a better start to Mexico City. On the first night we had to sleep in the hotel lobby when our plane got off early, when we asked if there was a restaurant nearby, we learned that there was a 24-hour El Moro around the corner. At 7 in the morning churro and hot chocolate It was very good to start the day with. Of course we went again, because it is really beautiful. Since it is always crowded during the day, you may expect to wait in line but it is worth.

We just got off the road and slept for a few hours at the hotel, we had to logically walk around and take a light tour. But since it is only open on Saturdays, we jumped on the metro and came to El Sabado and we did very well.

As we walked towards the market, we passed through a botanical park and were fascinated. Bazaar El Sabado is one of the most beautiful markets in Mexico. We drank coffee in a magnificent courtyard and dived into Mexican culture with live music. When we say Mexican embroidery, La Catrina figures, jewelery, wrestler masks, food and drink stands, treats, we passed by ourselves. An amazing market, you should definitely stop by.

There is also a 24-hour taco buffet, but there is no seat in front of it. The most important feature is making all kinds of offal. If you do not eat offal like me, you will not realize that it is written in the list in Spanish brains and kidneys. Tacos are really delicious in the buffet, which also includes red meat.

At a time when we were not familiar with Mexican pastries, we dived into Pasteleria Ideal. My perception was broken when I saw that it is the largest pastry shop and hundreds of varieties I have ever seen. Everyone was traveling with huge trays filling their tops.

You are already lost between cakes, breads, pastries, cookies and so on. It is a great place to have breakfast in the morning and take a snack in your bag. But as we traveled in Mexico, we realized that there was such a patisserie culture.

The House of Tiles

House of Tiles, where we decided to take a chance when we escaped from the rain and liked to eat inside, was one of the most famous places to visit in Mexico City. It can be very enjoyable to go inside and eat in this beautiful setting.

One of the city’s famous taco restaurants. Always crowded. Taco is beautiful but fresh juices are also legendary;)

There was a series called Taco Diaries on Netflix. Both different taco types and restaurants were introduced. This was one of the addresses I saw and recorded from there, but I did not like it very much. I don’t think you have to go especially.

Mexico City impressed us more than we expected with both its culture and energy. When we saw the people living on the streets, we were sad and remembered how everyone got covered and became afraid of the streets. We hope that we understand that the main problem is not the economy and we regain our old joy.